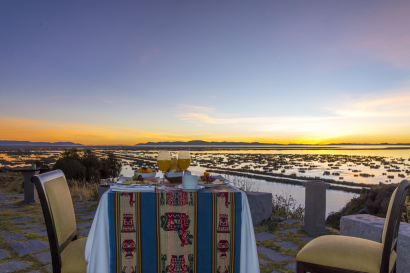 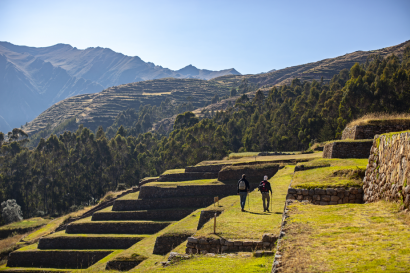 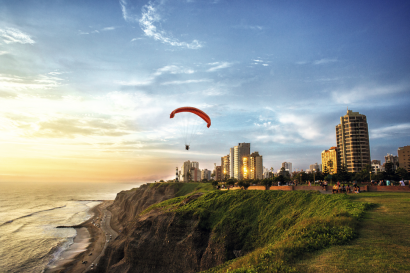 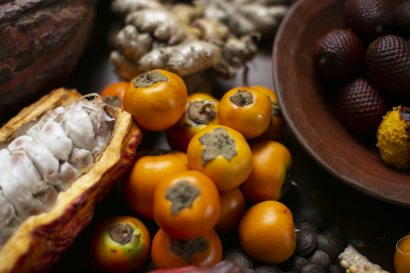 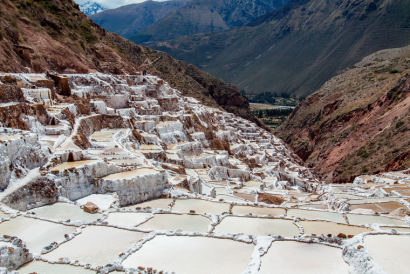 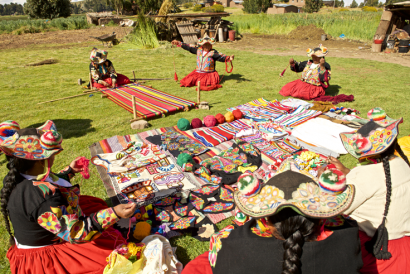 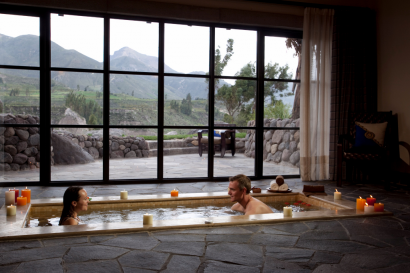 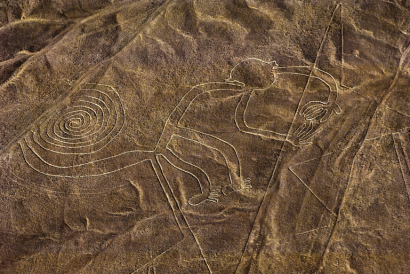 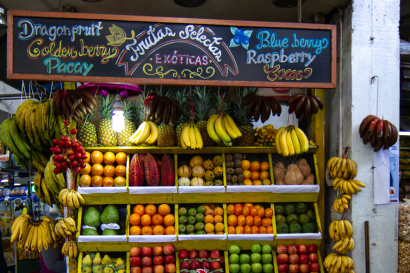 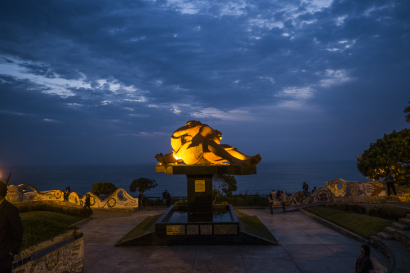 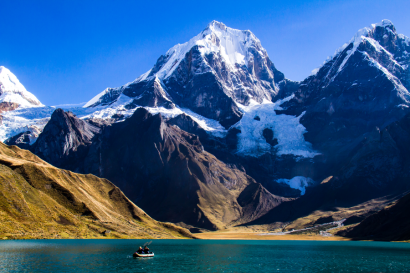 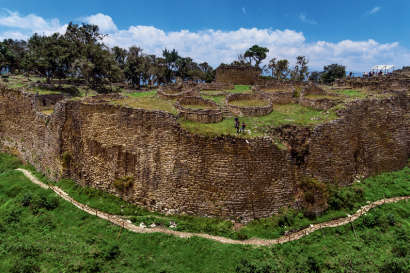 Peru is a land of contrasts, full of rich history, culture and beautiful landscapes, where visitors can immerse themselves in scenary that combines snow-capped mountains, lush rain forest and giant sand dunes. There are museums to visit, near-perfect waves to surf and vibrant cities to explore. Peru is well-known for its adventure tourism, bird watching, musical festivities and gourmet cuisine, as well as iconic archaeological sites of pre-Columbian civilization.

Luxury in Peru can take you by surprise. You experience luxury when the shy cock of the rock bird lets you take its picture or when you marvel at the unknown and exciting flavor of a local dish. Luxury in Peru is creative. It appears in hotels that used to be vice regal palazzos and in the powerful dances in every corner of the country. Luxury in Peru is also adventurous. It surfaces in the elegant camps pitched under the cold look of Salkantay apu or among the totora reeds growing on the shores of Lake Titicaca. But mostly, we find luxury in Peru in its stories. Each of its 24 regions keeps fascinating memories of its recent and remote past. These captivating stories evolve against the impressive backdrops of pre-colonial sites, majestic cities and untamed nature. A country that even when well-known will always have stories to tell.

Enjoy Peru by foot, by bike, by river or just by taking a moment contemplating the beautiful Andean surroundings, while experiencing its millenary culture. Explore the off the beaten path destinations, such as the enigmatic Chachapoyas, the imposing Huaraz or the amazing Amazonas River….There is an exclusive experience just for you!

Coastal, Andean and Amazon traditions meet and meld preserving the basic principle that sitting around a table is more than just for eating; it’s a time for experiencing. Peru is now regarded as the topmost gastronomic destination in South America (World Travel Awards). Several of Lima’s restaurants rank among the world’s best (50 Best). Its cooks’ creativity and ability have played a major role in this success but so do the variety and freshness of the ingredients they use. From its sea to the several landside ecological floors, Peru can boast a hugely varied and unique pantry of resources for its cooking. If you have tasted some of its food and were fascinated by it, a gastronomic tour is the perfect complement to your Lima experience. At the tour, you will learn about the ingredients that create its many dishes and will learn about emblematic preparations, like cebiche.
No wonder, eleven of the 50 best restaurants in Latin America are Peruvian and are located in Lima, a city that reaffirms its leadership as the gastronomic capital of the region.

SOME PLACES TO EXPERIENCE…..

AREQUIPA, THE WIHTE CITY
At the foot of the Misti volcano and on the banks of the Chili River this vibrant city preserves its colonial churches and mansions built in ashlar, a white volcanic stone resplendent on moonlit nights where travelers and locals alike pay tribute to shrimp chowder and stuffed chili peppers in old style picantería restaurants that source the fruits of the city’s prodigal vegetable garden in its populous markets. The city of Arequipa has been the birthplace of rebels and
artists who, in Peru’s direst times, made their voices heard. Arequipeños are rightly proud of the natural beauties of their region, such as the Valley of the Volcanoes and the Colca and Cotahuasi canyons; their monuments such as the Santa Catalina monastery and the Cathedral, and their wonderful cultural heritage.
Main attractions: Main square, Santa Catalina monastery, San Camilo market, Andean Sanctuaries museum, Company of Jesus compound, San Francisco church, Casa Goyeneche, Sabandía mill, Yanahuara lookout, San Lázaro district, Misti, Pichu Pichu and Chachani volcanoes.

CUSCO, THE ARCHAEOLOGICAL CAPITAL OF THE AMERICAS
No trip to Peru is complete without a stay in Cusco. Until the XVI century the capital of the Tahuantinsuyo empire was located there, a city of stone and gold palaces that was home to people from the four suyos (regions) of the Inca confederation. At the foot of Sacsayhuaman fortress, Cusco later built imposing churches, spacious mansions and quiet squares. The city’s luxury hotels occupy the premises of old monasteries and convents. Its restaurants serve menus prepared by the best Peruvian chefs, while eclectic nights cater to all tastes. Most importantly, it is also the starting point for visits to the Sacred Valley of the Incas and Machupicchu.
Rainy season: December-April; Dry season: May-November
Main attractions: Plaza de Armas, Cathedral, Church of the Company of Jesus, Stone of the 12 angles, Cusicancha, Coricancha, La Merced church, San Francisco church, San Cristóbal church, San Pedro market, Inca museum, Archbishop’s museum, fortress of Sacsayhuaman, Qenqo, Puca Pucara, Tambomachay.

NASCA AND PALPA LINES AND GEOGLYPHS
The Nasca and Palpa desert plains make up the rough paper where the Nasca lines and geoglyphs were drawn, between 500 BC and 500 AD. Many kilometers of lines and geometric figures intersect designs of birds, fish, mammals, insects, reptiles, plants, and nthropomorphic and fantastic beings. The 800 drawings stretching over 450 km² of hot desert sands can only be seen in their full dimension from the air. German scientist Maria Reiche, “the lady of the pampa”, studied and preserved the figures for more than five decades and figured out they were a great astronomical calendar. Archaeologist Markus Reindel has suggested the drawings marked ceremonial paths, while historian David Johnson hypothesized they were maps pointing to underground water sources.
Nearby attractions: Nasca city, Cantayoc aqueducts, Chauchilla cemetery, Cahuachi pyramids.

CARAL, THE OLDEST CIVILIZATION OF THE AMERICAS
Toward the end of the XX century, the pyramids and the circular plazas seen today in Caral were stone and soil hills beside the Supe River where locals passed without suspecting that, under them, a compound spanning 66 hectares and 5000 years old had been conceived and built as a gigantic calendar. The men of Caral were farmers, fishermen, artisans and musicians who played flutes, antaras and cornets. Archeologist Ruth Shady has suggested they created
a thriving civilization whose society lived in community, in harmony with nature and had also rulers and governed people. Nearby are the Supe, Barranca and Huacho coastal towns, reputed for their beaches and fine dining.

LIMA, THE CITY OF KINGS
Until the XIX century, Lima was a walled city of narrow streets crowned by long balconies. Limeños were known for parading their saints’ images in processions, their sensuality, endless meals, taste for board games and their fun summers in Chorrillos, a nearby seaside resort. The historic center of the City of Kings retains some of that vice regal profile as in the stately palace of Torre Tagle, the magnificent San Francisco convent, and the 1610 stone bridge, among other monuments. The Peruvian capital is today a megalopolis of almost 11 million people who fervently live by the traditions not only of old Lima, but from all over the country, and preserve their devotion to good food.
Main attractions: Main Square, Cathedral Basilica, San Francisco Church and Convent, Santo Domingo Convent, Aliaga House, Jirón de la Unión, San Pedro Church, Nuestra Señora de La Merced Church and Convent, Las Nazarenas Church and Sanctuary of the Lord of the Miracles, San Martín Square, Matías Maestro Presbytery Cemetery, Alameda de los Descalzos, Paseo de Aguas, Acho Plaza.

TAQUILE ART OF KNITTING AND WEAVING
On the island of Taquile, men and women learn to weave and knit since their earliest age. Locals knit as they converse in the main square, on their way to their farms and while watching the immense blue of Lake Titicaca. For a man to be able to marry and thus share in the community’s decision, he must knit his own chullo hat and, after the wedding (a week-long celebration) the new husband must weave his wife’s skirt while she makes a chuspa or cloth bag with the colors of the rainbow. Each taquileño knit helps to preserve the cultural identity and the memory of this peaceful island’s approximately 2000 friendly people.
Distance from Puno: 1 hr. 30 min. in speed boat
Nearby attractions: Amantaní Island, Uros man-made Island, Chucuito Peninsula (Luquina Chico Community), Puno City.

AIMARA COMMUNITIES
Two million members of the Aymara first nation live on the Collao high plateau, a large esplanade at 3800 meters above sea level straddling Argentina, Peru, Bolivia and Chile. The Aymaras are heir to the extraordinary cultures of Pukara (200 BC – 200 AD) and Tiahuanaco (300 – 1000 AD) and share their language, elaborate traditional textile art, ancestral farming techniques, and a vast art and music legacy. UNESCO has prepared a plan to safeguard this endangered cultural legacy of the communities of Peru (Tacna, Moquegua and Puno), Bolivia and Chile to ensure it will be preserved for future generations.