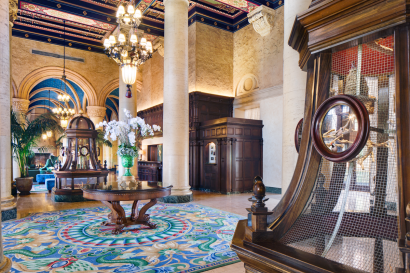 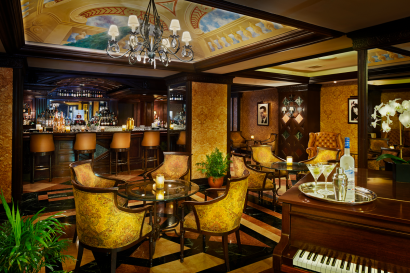 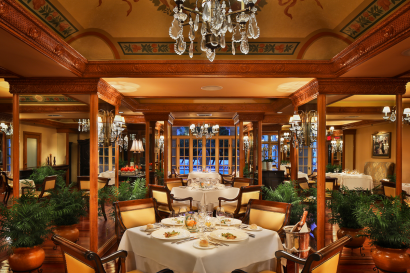 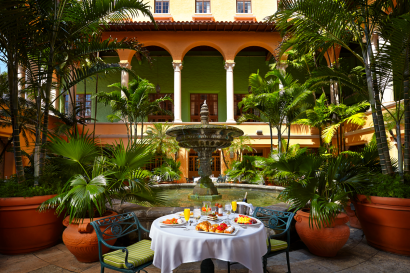 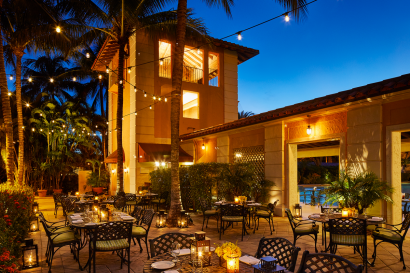 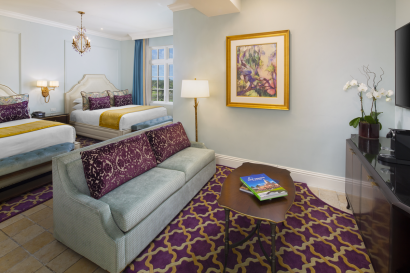 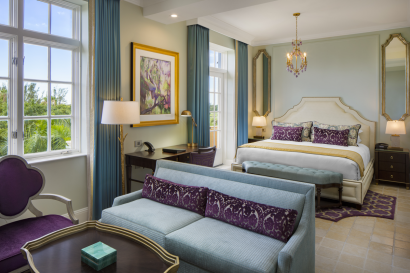 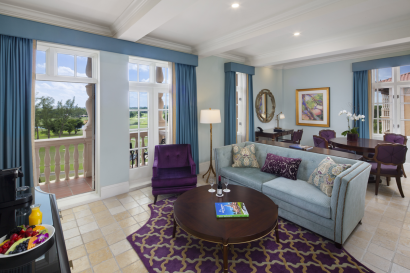 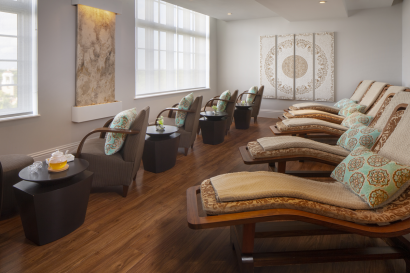 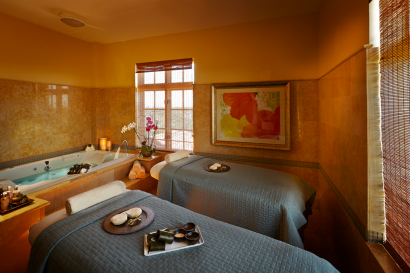 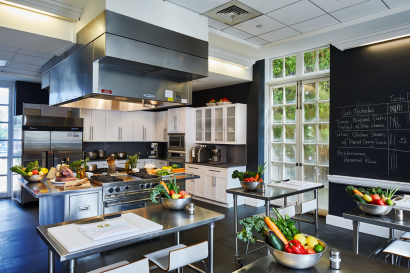 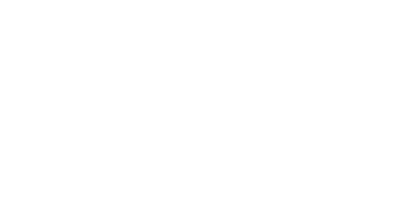 Matthias Kammerer, Managing Director.
Accomplished hotelier, Matthias Kammerer, joined The Biltmore Hotel, Miami team as the new
Managing Director in January 2013, bringing over 19 years of industry and market experience to the property. Kammerer arrives at the Biltmore after a seven year stint as the Managing Director of Canyon Ranch, Miami Beach. A Swiss native, he graduated from the Hotel School Loetscher, Muerren, Switzerland and is a trained professional Chef. He began his professional career with Norwegian Cruise Lines in 1983 as an assistant cook and worked his way up to senior management level and Hotel Director. In 1990, Kammerer joined Sonesta Hotels and was based in Egypt and Anguilla before coming to Miami in 2002 at the Sonesta Beach Resort on Key Biscayne as the General Manager and Vice-President.

Highly recognized in the US, the Biltmore is now trying to expand its brand recognition internationally and to establish its luxury reputation abroad as the hotel represents a new luxury alternative in the Miami Market with a very distinct positioning versus the traditional perception of the Miami experience.

The Biltmore was built in 1925 and opened its doors in January 1926. Land developer George E. Merrick, also founder of Coral Gables commissioned the renowned architect Leonard Schultze and S. Fullerton Weaver, responsible of the design of New York City’s Grand Central and the famed Miami Daily News Tower (now known as the Freedom Tower).
Most fashionable resorts in the entire country in its heyday, hosting royalty of both the European and Hollywood variety. The Duke and Duchess of Windsor, Ginger Rogers, Judy Garland and Bing Crosby were frequent guests. In fact, everyone who was anyone, from politicians like President Franklin D. Roosevelt to notorious gangsters like Al Capone– stayed at The Biltmore, where they enjoyed fashion shows, gala balls, aquatic shows in the 23,000 square foot grand pool, elaborate weddings and world‐class golf tournaments. With the Jazz Age at full cry, The Biltmore’s big bands entertained wealthy, well‐traveled visitors to this American Riviera resort.
Challenged by America’s economic lulls in the late 1920’s and early 1930’s, The Biltmore thrived by hosting aquatic galas that drew crowds and kept the hotel in the spotlight. Up to 3,000 spectators turned out on Sundays to watch synchronized swimmers, bathing beauties, alligator wrestlers and the four-year-old boy wonder, Jackie Ott, whose act included diving into the immense pool from an 85‐foot high platform. Prior to his tree‐swinging days in Hollywood, Johnny Weissmuller was a Biltmore swimming instructor and later broke world records at The Biltmore pool. The aquatic shows with Renowned Esther Williams were extremely popular with families, who would later dress up to attend fashionable tea dances on The Biltmore’s grand terrace.

• Luxurious National Historic Landmark Resort established in 1926 set on 150 acres of lush tropical land.
• Situated in the exclusive residential neighborhood of Coral Gables, located in the heart of Miami offering easy access to all the main activities and key areas of Miami.
• Offers 273 guest rooms, including 133 suites with an atmosphere of Mediterranean architecture, traditional elegance, and views of the city skyline, golf course, and unique pool.
• Located 5 miles (8km) from Miami International Airport, 11 miles (16km) from Miami Beach, 9 miles (14km) from Port of Miami, and walking distance to shopping and dining in Coral Gables’ acclaimed Miracle Mile and located near The Shops at Merrick Park.
• Iconic 23,000 sq. ft. heated pool where the likes of Esther Williams and Johnny Weissmuller swam. One of the largest in the continental US. Pool scenery includes comfortable lounge furniture and nine private cabanas hidden away amidst a beautiful oasis of palms, hibiscus, and bougainvillea.
• Five culinary experiences including the award winning Palme d’Or, recognized by Zagat as one of the best restaurants in the country, 5 diamond award (only 3 in Florida); Fontana, a traditional Italian restaurant surrounding The Biltmore courtyard and fountain; the alfresco poolside Cascade; The 19th Hole golf-centric restaurant, and our educational and recreational Culinary Academy.
• The Biltmore Golf Course is an 18-hole, 71-par championship course, designed in 1925 by legendary golf course architect Donald Ross and recently selected to feature Golf Channel Academy at The Biltmore with Justin Bruton.
• 12,000 sq. ft. full service spa, a sanctuary for personal peace and tranquility and a Benessere health and wellness program offering over 100 group exercise classes in our state-of-the-art fitness center, wellness-oriented treatments at our world-class Spa, healthy menu choices at our award-winning restaurants, and healthy cooking classes at our culinary academy.
• 24/7 concierge services from The Biltmore’s Les Clefs d’Or able to assist with the simplest to the most complex requests and offers information on dining, shopping, tours, and attractions.

Located in the exclusive Coral Gables area (little Beverly Hills of Miami), The Biltmore Hotel is situated within minutes of downtown Coral Gables and the illustrious Miracle Mile, where a large variety of renowned restaurants, boutiques and businesses are located. The hotel is also a short drive away from downtown Miami and Miami Beach, Key Biscayne, Cruise Port of Miami, Coconut Grove, Little Havana, Winwood Art District among other major Miami attractions.

The hotel is often known as the hotel of the presidents that it has always been welcoming since its opening in 1926 with President Roosevelt until now with President Obama. President Bill Clinton welcomed the summit of the Americas with 35 heads of state at the Biltmore in 1994. He remains an active Golf player at the Biltmore when possible. Johnny Weissmuller, the first Tarzan and Olympic Champion, was a swimming instructor at the Biltmore Pool. The Biltmore Pool was, during the golden years, the gathering point of all the Miami and Coral Gables Jet-set with more than 3000 people watching every Sunday the World’s Greatest Water Carnival including Pageant shows, Diving contests and synchronized swimming ran by famous Esther William. The Iconic Biltmore Pool is one of the largest hotel pool in the Continental US with 600,000 gallons of water and representing more than ½ a square mile in size. The actual Presidential Everglades suites was previously named Al Capone Suite due to its famous guest for many years. The Biltmore was classified as Official Historic Landmark in 1982.

The hotel offers 273 guest rooms, including 133 suites, which range from Junior to Executive suites. The legendary Everglades Presidential Suite and the Merrick Penthouse Suite, named after the resort’s founder George Merrick, are among The Biltmore’s most distinguished accommodations.

• Fontana:
Fontana offers Italian-inspired cuisine punctuated with local and seasonal ingredients and an exceptional wine list. The handsome rusticity of the restaurant’s stone and tile interior, with an open-air kitchen and wood-burning stove, flows into the lush landscaping of the fountain-centered courtyard.

• Cascade:
Cascade is an outdoor oasis tucked under a cascading 23-foot waterfall that overlooks The Biltmore pool. This al fresco restaurant, set in the colonnade-lined loggia, is perched at the edge of the swimming pool with views of the golf course and gardens.

• 19th Hole Bar & Grill
The most casual of the resort’s dining sites, the 19th Hole overlooks the golf course and offers light dining, inside or on the terrace.

• Situated on the seventh floor with panoramic views, the elegant Biltmore Spa is a 12,000-square-foot sanctuary for personal peace and tranquility. The spa offers an extensive selection of traditional and pioneering treatments, including extensive massage therapy modalities, facial treatments to suit all skin types and needs, therapeutic body scrubs and wraps, and signature ritual journeys.
• One of the largest hotel swimming pools in the Continental U.S., The Biltmore’s pool measures approximately 23,000 square feet and holds 600,000 gallons of water.
• The Biltmore’s 10,000-square-foot, state-of-the-art Fitness Center allows guests to maintain their fitness regimen while traveling. It features an area dedicated solely to cardiovascular exercise, and a second space with a comprehensive presentation of workout equipments, the center offers more than 100 complimentary weekly exercise classes.

• The resort features 75,000 total square feet of function space, with an entire wing devoted exclusively to small meetings and breakouts in order to enhance productivity.
• A total of 33 meeting spaces, 12 in the hotel, 14 in the Conference Center of the Americas
• Meeting spaces include 3 ballrooms, the largest is 6,200 square feet with a 46-foot ceiling
• 11,280 square feet of outdoor banquet space.